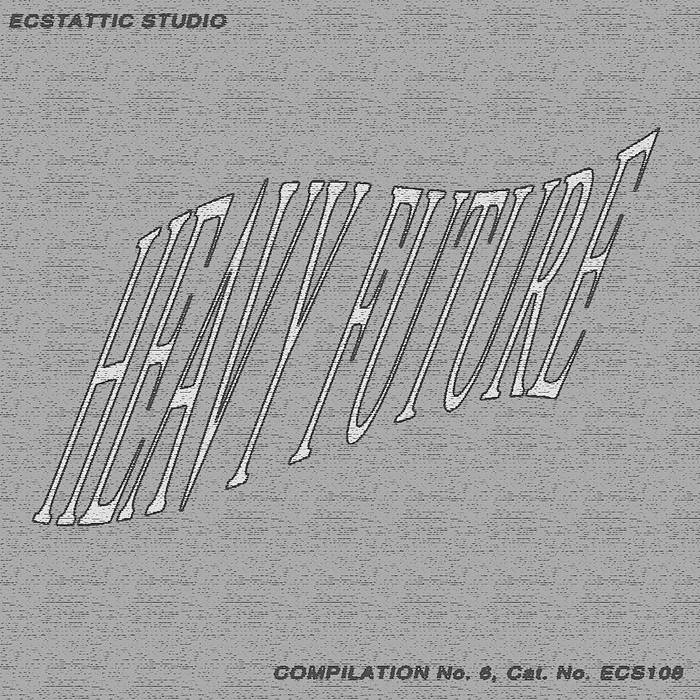 "Heavy Future" is the sixth compilation of works recorded, mixed and mastered at Ecstattic Studio. With each compilation, I try to introduce new concepts and ideas - an ideal which "Heavy Future" takes further than ever before. While featuring the usual mix of new and old tracks by artists both established and just-debuting, this compilation not only features more music than ever before but also finds the tracks sequenced into each-other in the style of a radio show or megamix (air horn drops not included).

Most of these tracks were recorded in 2016, a year whose chaotically bleak nature became a running joke early on. Now that we're facing down another year (or more) of the same sort of chaos and unrest, "Heavy Future" takes on a new sort of gravitas: a solid block of triumphantly weird, heavy, beautiful transmissions from a rich artistic community. I hope in these crazy times, this sprawling collection of music helps you. Personally, I am extremely grateful and proud to have been a part of all of these projects. Now more than ever, art needs to be treasured rather than trivialized.

Below, a bit about each artist:

DIIE is a proudly bizarre four-piece Krautrock-Shoegaze-Desert Jazz band. "Untransfigured" is the first single from their soon-to-be-released debut full-length, "III." It's probably the most normal song on the record.

WITHOUT is an anarcho-feminist Post-Doom ensemble whose musical range spans blackened-doom, contemplative post-rock, pure ambient and vicious thrash. Featured here is an excerpt from their epic-length "Ego," featured on their latest, self-released EP.

FALLING are a post-everything band whose music hops genres and dynamics with an impressive agility, all while clutching Slint's "Spiderland" as a devotee would a pocket bible. "Can't See," here in shortened form, showcases the bands gnarly tunefulness and is taken from their debut EP of the same name.

LIVID are Minneapolis' premiere Doom-metal export, having mastered a crushing, unrelentingly heavy sound and pared it with spare production and operatic vocals. "Sint" is taken from their debut, one-track EP, which is soon to be followed by an LP on Prosthetic Records.

NEW ROCKET UNION is a Punk Rock'n'Roll two-piece whose lineup is as economical as their music: pounding drums, heavy riffs, shouted vocals and no time for messing around. "Be My Girl" will be featured on an upcoming LP.

DIVER DRESS are a weirdo-punk/post-punk band whose music barrels forward with an alternately nihilistic and sweetly empathetic energy reminiscent of the DIY punk classics of yore. "Infected" is taken from their third EP, "Live Forever," which is out now on digital and cassette from Ecstattic Studio.

MURDER SHOES are a sadly defunct Dream-Pop band whose final record, "Fall," saw them finding the perfect balance between modern shoegaze sounds and vintage pop music. It is out now on digital and cassette from Ecstattic Studio and features the grey-skied dreaminess of "Far Away."

RUPERT ANGELEYES is the long-running, solo garage-pop project of Kyle Sobczak. Captured here for the first time with his live band (featuring members of Phantom Tails, Suzie, Controversial New Skinny Pill and more) in a whirlwind session meant to catch a snapshot of Rupert as an enthralling live act rather than a labor-of-love studio project, the two songs featured here ("Oxytocin" and "The Electrician," a cover of the Scott Walker song) infuse the project with different, more immediate sound and energy that still showcases the band's immense skill and perfectionist bent.

THE FLORISTS are a weird Pop-rock band that draws from the deep well of musically-austere yet lyrically-dense indie rock of the early 2000s, yet never forget to present it with a unique personality and musical sensibility. "Lake of the Aisles" is a perfect example of the thrilling high-wire act that the band pulls off on each track of their debut EP, "Can You Feel the Stasis?"

KOZWOGRAND is the cosmically-minded Avante-Funk project of composer Scotty Monten. "Space Tiger Samurai" is the perfect introduction to the project, from its insane title to its electro-acoustic, hyper-dense, sample-obsessed production style. His debut EP, "Starchitecture," is a whirlwind 10-minute journey through the cosmos that has to be heard to be believed.

BACKPACKERS is a new Soul-Pop project that melds the classic soft-soul sounds of the 70s with modern alt-r&b production, grooves and aesthetics. "Gospel" is a breezy slice of vintage pop featuring featherweight guitars and big-room drums that will leave you wanting more. Their debut EP is out now on digital and cassette from Ecstattic Studio.

HOLLOW BOYS are the long-running Gloom-Pop/Sludgegaze project of studio proprietor Ali that recently changed their name to ANOTHER HEAVEN. "Aquamarine" is taken from the same sessions that produced the "Sugar" single but didn't make the cut. Instead, it is presented here as the last release under the Hollow Boys name. "Sugar" by Another Heaven is out now on digital and cassette from Ecstattic Studio.

TOTAL GAZE are a three-piece Shoegaze-Punk band that weld the hazy guitars and dramatic vocals of Dream-Pop with Punk's endless forward momentum, creating a sound all their own. "Television" showcases their keen ear for melody as well as their satisfyingly bizarre song structures.

THE AWFUL TRUTH are a Garage-influenced Folk-Pop band that combine the brooding introspection and acoustic instrumentation of Folk with the eclectic progressions and energy of Garage and Pop music. "Flake" is an impressive single, creating an upbeat but hazy atmosphere that's punctuated by stabs of synth and backup vocals.

THE KARMA KICKS are an amiable rock'n'roll trio who aren't afraid to get twangy - which they do on Airport, a song that is straight Willie Nelson until the heavy pop chorus kicks in with a wall of verbed-out backup vocals, pounding drums and watery guitars. The attendant EP, "Kind of an Island," is just as good, if a lot heavier and less twangy.

JOEL CRINER is a folk-rock artist whose latest, yet to be released project is made up of songs that were slowly assembled into full-band arrangements from spare acoustic performances. "Crazy-Eyed Glee" barely hints at these methods, instead presenting a breezy, Replacements-indebted slice of perfectly-executed pop-rock.

JEREMY YLVISAKER is a guitarist and fixture of the Minneapolis music scene, having played with just about everyone from here and abroad. "Textin" is taken from his long-gestating solo LP, an eclectic collection that ranges from primal rock'n'roll to the near-ambient minimalist jazz of the song featured here - a collaboration with JT Bates and Mike Lewis (who, along with Ylviasker, form ALPHA CONSUMER) as well as vibraphonist Joey Van Philips.

PLANET PLOOKEY is a Prog-Funk project that's been slowly amassing both recordings and momentum on their way to releasing a first LP. "No. 27" is their stunning debut release, a sonically dense composition that winds its way from breezy Jazz to tightly wound Prog to full-on Funk, stopping along the way to incorporate sax solos, crowd noise, farmyard sound effects, weird drones, bird calls and more before ending with a perfectly-executed James Brown-style full stop. It's utterly original and completely awesome.

All tracks Recorded, Mixed and Mastered by Ali Jaafar at Ecstattic Studio.